As a curious web developer that’s moderately obsessed with statistics, I decided to go back and look at my history of side projects, blog posts, and other junk I’ve posted on twitter to see what has had the biggest impact on my ‘social reach.’ Yeah, I know. It felt wrong typing ‘social reach’—I’ll put a dollar in the jar. I’ll probably owe a few of those before this post is done.

It’s a common sentiment that as developers we should focus on making cool stuff and the rest will solve itself. While that has been my general plan for my career and side projects, in hindsight I don’t believe that to be the complete truth. I think developers should spend time on self marketing—larger professional networks (not just social networks) lead to more opportunities.

So as a blind squirrel, I come to you with the nuts I’ve found: seven events that have bumped my network size and what I’ve learned from studying them. Note that Facebook is not mentioned here. I don’t use Facebook for career development.

Out of those seven events, three were the direct result of Mr. Paul Irish. While I have no idea what I did to get in Paul’s good graces—I appreciate his concerted effort to share RSS feeds (Event 1), people to follow on Twitter (Event 2), and Google circles (Event 3). Paul increases the number of people consuming web development content which leads to more well informed developers. A rising tide lifts all boats. This is something we can all do. Look for some similar posts from me soon.

Trailblazing can lead to isolation. Solve problems collaboratively or competitively—don’t solve your own problems alone.

After BigText came out, I was getting 2 RSS subscribers per day. Four months later when Paravel released FitText (Event #4) and linked to BigText that number jumped to 6. Even though the two plugins were competitors, we were both trying to solve a similar problem and our growth became intertwined.

Concentrate on the Right Network #

It’s a lot easier to get an RSS subscriber or get circled on Google than it is to get someone to follow you on Twitter. It would seem that Twitter users curate their Twitter friends very closely since it’s one big unconfigurable stream (don’t get me started about how useless lists are). RSS and Google both let you self-organize your incoming posts in such a way that makes it easier to ignore content without unsubscribing.

If I had to choose, I’d take a Twitter follower over an RSS feed subscriber over a Google follower. But it ain’t a zero sum game.

I’ve screwed the pooch on this quite often—most notably on SocialCount and BigText especially. I’ve had people say to me: “Oh—SocialCount? You built that?” Obviously not ideal. Personally, I felt that both of those plugins were higher quality than parseIntimate (Event #5), but parseIntimate had my twitter handle right on the front which bumped my followers more than SocialCount or BigText (prior to FitText).

Despite my ghost town of a profile on Google , my circled count jumped when I joined Filament Group (Event #6). Of course, working for a company that is so heavily invested in the community and open source is great.

Give Talks and Encouragement #

For the Front End Engineering Manifesto (Event #7) I followed my own advice and put my twitter handle on both the top and bottom of the presentation and added SocialCount widgets for easy sharing. However, F2EM almost didn’t see the light of day.

Sometimes you just need a little push and I was lucky to get it from those guys. And at the end I’m very glad I posted it—F2EM was one of my most successful projects.

While I haven’t dipped my toe into the professional speaking circuit, I should thank Rey Bango for encouraging me to submit a talk to the jQuery Conference awhile back. I’ll dive in some day Rey!

I’ll keep my eyes open for someone that I can give a little push to and I encourage you to do the same. If you need my help or advice, I’d be glad to do what I can to help. Hit me up on Twitter or on Google Plus. 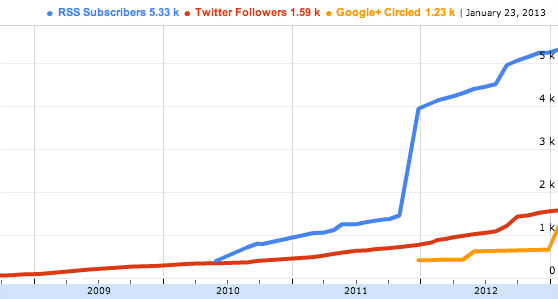 Full data available on Google Spreadsheets. RSS subscriber data provided by Feedburner (even though my first post was in 2007, I switched from naked RSS in 2010). Twitter data was provided by TwitterCounter and Google data by Social Statistics.