Speedy Screenshots, or How I Improved the Robustness of the Screenshot Service

This is a reply to my own blog post: Building an Automated Screenshot Service on Netlify in ~140 Lines of Code.

There is a limitation with the Screenshot Service: when the page you’re taking a screenshot of is slow and/or very large, the request times out. Quoth myself, from ~7 months ago:

What happens if a site is super slow or is currently down?

Netlify Functions have a 10 second execution limit. If the site doesn’t render in 10 seconds, we show a fallback image by default. Currently this is a low-contrast 11ty logo using the same image size as the requested screenshot (via SVG width and height attributes).

While this fallback behavior is okay I was starting to see it more often than I’d like. Why, you might ask? Why would it take more than 10 seconds to fetch a screenshot?

Here’s a sample OpenGraph image declaration from the <head> of one of my blog posts (the <details-utils> one):

When requesting this image, the api-screenshot service loads and renders https://www.zachleat.com/opengraph/web/details-utils/ using Puppeteer to return a 1200×630 screenshot jpeg image.

However, on that dedicated /opengraph/web/details-utils/ page waits a big ’ol chunk of kryptonite. Specifically, this page makes another screenshot service request 😅 to use the referenced blog post as a background image (in this case /web/details-utils/).

Okay, fine. Let’s admit what happened here. I flew too close to the sun. I chained too many screenshots together. This was causing timeouts for larger/weightier blog posts and pages (showing the low-contrast SVG of the default 11ty logo).

Have I overengineered it? Yes. But if we engineer it more—it will modulo back around to normal levels of engineering. Maybe even underengineering. Right? That’s how this works? I’m not willing to admit the answer to this yet.

But I do know that we can fix it. And we can fix it without removing any of the links in the chain of prized and celebrated screenshots.

I started by adding a new timeout to the screenshot service:

You can see it in action on this 12 second blocking external CSS file demo. Note that when the page loads successfully (after 12 seconds), it has a green background.

Now check out this screenshot of the 12 second demo with a 3 second screenshot timeout: 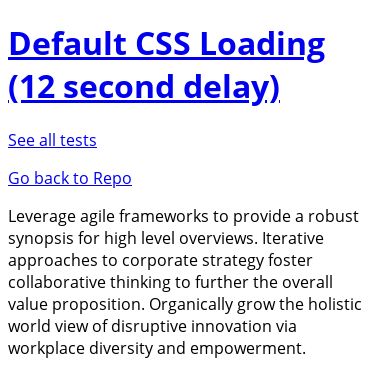 Previously, running the screenshot service against this page would have shown the fallback 11ty logo.

Use ttl for fallback images #

When an image times out and the 11ty logo fallback image is shown, we were forced to use a HTTP 200 status code for that condition or some browsers wouldn’t show the fallback image at all (Firefox). This was a bit of a problem because it meant that screenshots that timed out wouldn’t retry again until a new build was triggered (which could be a long time for a dedicated screenshots service).

Fortunately Netlify has added a Time to live ttl option to On-demand builders that allows you to specify a fixed amount of time (minimum 60 seconds) before a request is invalidated and a new request is generated. We can now add the ttl specifically for requests that hit this timeout without invalidating any of the previously successful ones!

Next, I added a grab bag of small performance tweaks to Puppeteer:

I could have removed the api-opengraph references from my site altogether. It’s my site. I have full knowledge of where the OpenGraph images are. I don’t need an external service to tell me that.

I could make requests directly to the screenshots API. However, api-screenshot doesn’t currently support image resizing with the opengraph viewport size—but api-opengraph does resize/optimize images.

I kept api-opengraph to get image optimization for free to avoid those weighty default 1200×630 images clogging up my page. Ultimately this means I’m chaining 3 different serverless functions together under the same 10 second limit, which feels a little risky but seems okay in practice (maybe because my site renders pretty fast as-is?).

I will likely improve the screenshot service to support at least one smaller OpenGraph image size (probably 600×315) and additional image formats (png and webp) at some point. Feels like v2.screenshot.11ty.dev may be in our future.

With these changes in place, I haven’t seen any fallback 11ty logo screenshots on my site in quite some time!