If you’ve read the neverending series of blog posts I’ve written about how fonts load on the web, you’re probably already become very familiar with the The Flash of Invisible Text (FOIT), or how the browser hides the text while the web font is loading.

I wanted to highlight a particular variant of FOIT, which I’ll forever refer to as the Mitt Romney Web Font Problem. This specific problem occurs when you use multiple weights and styles of the same typeface together.

The headline from Slate.com was important breaking news about Mitt Romney’s intention to run for President. The headline was rendered using the Titling Gothing FB typeface but using two different web fonts, one for bold and one for combination bold and italic. If you don’t see the italic variation above, I’ll explain why.

Correction: As Stephen Coles notes in the comments the typeface is Titling Gothic, not Apres.

This is how the page looks when all of the web fonts have finished loading: 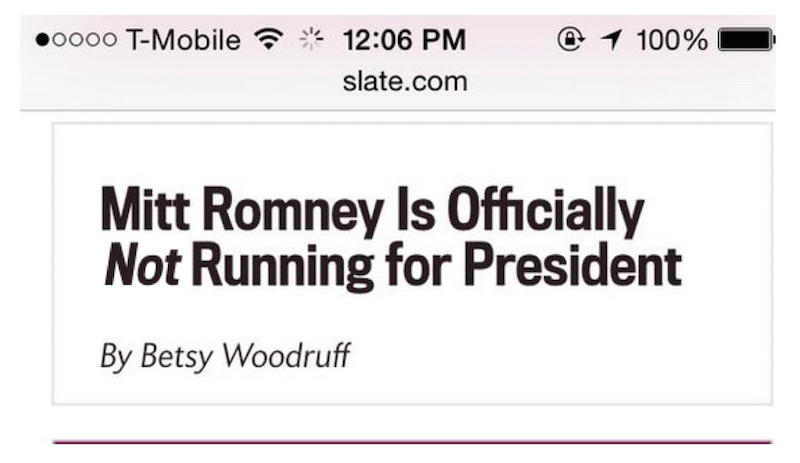 Why did this happen? As you may already be aware, each web font incurs its own separate FOIT. By combining two web fonts together in a single headline, the FOIT has created a race condition that alters the integrity of the content. A glance at the headline indicates that Mitt Romney is indeed running for President. When the page finishes loading, the real message is revealed: he is, in fact, not running for President. Obviously, this is bad, and especially so for a news organization that depends on clarity and accuracy.

What can web developers do? #

What should web browsers do? #

I only feel more strongly now that web browsers should fix this problem natively. They should apply the blocking font-rendering behavior in a smarter way. The browser knows when it is loading multiple @font-face fonts of the same typeface that have matching font-family properties and vary only by font-weight and font-style. It could use this information to assign a smarter priority level to each @font-face block.

Coincidentally, this matches the order in which the @font-face matching algorithm looks for a @font-face block to match up with a default styled element (font-weight: 400; font-style: normal).

This proposed browser default behavior would solve the Mitt Romney Web Font Problem without web developers having to apply fixes to their own sites individually.

What should Mitt Romney do? #

Those of us that remember Mitt Romney’s sordid remarks about 47% of Americans know that his words may have cost him the 2012 US Presidential Election.

It is unlikely to be coincidence that just a few short weeks after the Mitt Romney Web Font Problem was documented on Twitter, HTTP Archive reported that web font usage among the top 1000 web sites grew to 47%.

The 47% continue to plague his legacy. I expect that we’ll see a press release from his media team shortly.

Example variable names are for the Raleway typeface but are easily changed for any web font.

★ The Mitt Romney Web Font Problem http://t.co/isHBqCaTdb or why loading multiple web fonts for a single typeface is dangerous.